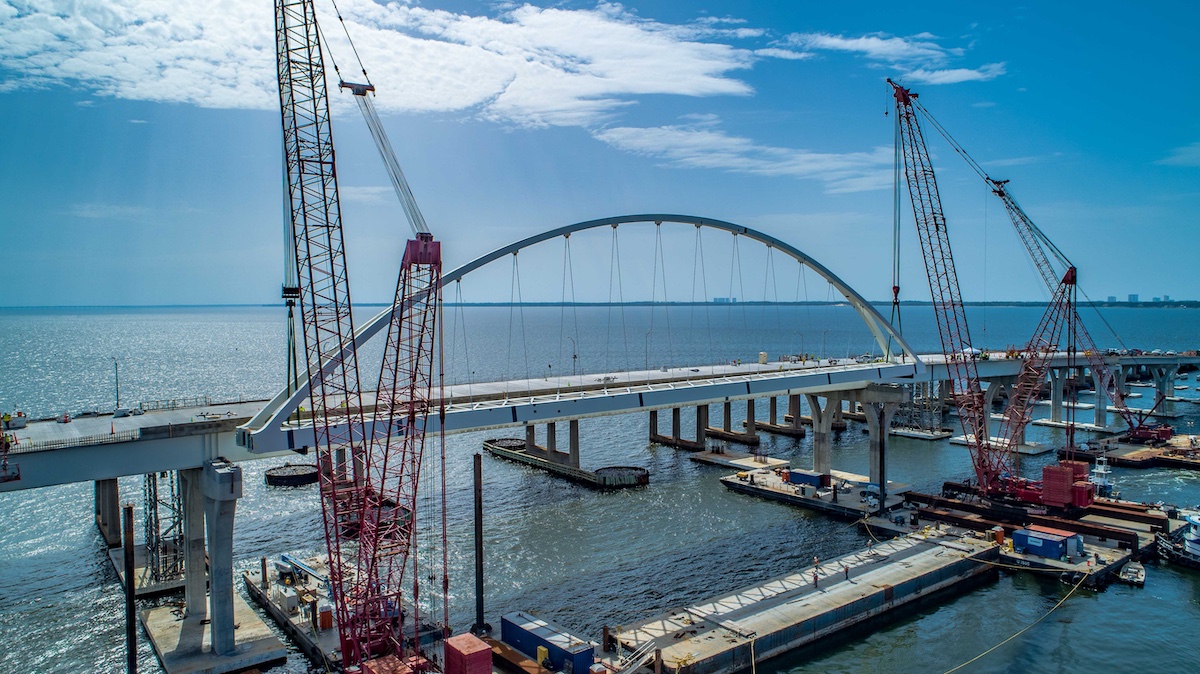 Construction crews from Skanska USA Civil Southeast lifted the center arch into place atop the eventual eastbound span of the new Pensacola Bay Bridge on Thursday, June 27, 2019. This is a significant milestone for the project, which at $427 million is the largest transportation initiative in Northwest Florida history.

“Today was a significant event for the construction team and for Pensacola as we set the 375-foot long, 83-foot high arch in the main span of the bridge,” said Brett Pielstick, the construction engineering and inspection program manager for the project. “This is a structural member that supports the shared-used path. It will change the overall signature appeal of Pensacola over the years to come.”

This will be the first of two arches that will stand majestically atop the new Pensacola Bay Bridge. Upon completion of the westbound structure, crews will install the second arch.

The arches weigh 800,000 pounds and in addition to their aesthetic splendor, they  are designed to provide structural support for the 10-foot-wide multiuse paths that will be part of both the east and westbound bridges.

The arches consist of structural steel plates that were cut to shape and welded together. The strands that extend from the top of the arch to the bottom deck are made of high-strength steel and covered by a protective sheath. The strands were fabricated in Arkansas, and before arriving in Pensacola they were shipped to Slovakia to apply a wax and high-density polyethylene coating to protect them from the corrosive elements of the coastal environment.

Shifting traffic will insure there is no interruption of service while the existing bridge is demolished, and the new westbound bridge is completed.

Final completion for the new Pensacola Bay Bridge, including the reconstruction of the adjacent 17thAvenue interchange, is currently estimated for mid-2021.