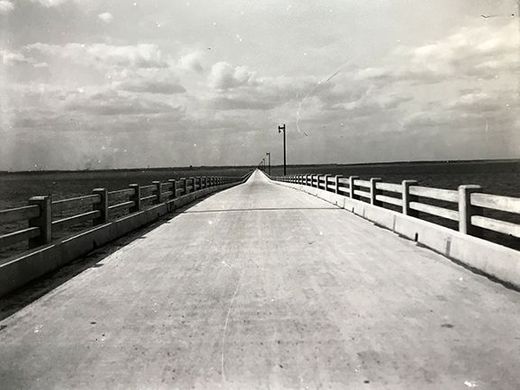 The following article was published in the Sunday, March 3 edition of the Pensacola News Journal.

The thousands of motorists who cross the Three Mile Bridge each day are well-aware of the construction in progress, to build a new version of the bridge. The News Journal has carried details with fine photos to illustrate the story of this $400 million project which will carry traffic for probably the next 50 years and more. With the telling of this present story there also is a news trail that goes back a long way, for it was 90 years ago that the first engineering was in progress for the first version of the span.

Through the 1920s, a passage across Pensacola Bay was sometimes by ferries that functioned briefly or on a private party boat, en route for fun on the beaches. Fort Pickens was present on the island, a military factor from the 1840s, but personnel moving there faced the same travel limitations.

Then, in 1929 a time of change began. O. H. L. Wernicke was a retired civil engineer, and it was his curiosity, his dream, that began the design process. Wernicke believed that a bridge could be built across the bay. Using his engineering skills, he drafted a basic plan, but chamber and government leaders felt that the concept was too difficult, too expensive to be practical.

A happy coincidence brought Wernicke into contact with Russell Patterson, another civil engineer then involved with constructing a bridge at Panama City. Patterson was a staff member of the Minneapolis engineering firm of Johnson, Drake and Piper, and at Wernicke’s invitation, Patterson agreed to visit Pensacola and examine the plan on paper, and to give his thoughts. Patterson came, was intrigued and agreed to work with Wernicke on a modest plan enlargement.

The pair then presented the prospect to Patterson’s Minneapolis company, whose leaders felt this would be an interesting challenge, one which might be to their image advantage should they build it. At that point, leaders of Johnson, Drake and Piper conferred with other northern financial interests, and they together agreed to be private financiers for the bridge, should it be constructed.

With those additions, the plan was returned to Pensacola and again placed before the local government, the chamber and, as required by law, before the Legislature. Now all agreed and gave their permission. Thus, the bridge plan was given the green light.

Just as construction was well underway, the first wave of the depression rolled over all economies. Despite this, the project continued. By late 1929, observers could believe that Pensacola and its people were going to have their open way to the peninsula, and then, with a second short span, on to the island.

In June 1931, the dedication ceremonies were held, with the first vehicles lined up to be the first across. The plan for repayment of the costs included a toll system, which worked, and in the years immediately following, despite the economy, the Casino too was added. Wednesday night boxing matches were held on the island; the first easy enjoyment of the sand and waters was available.

Ninety years ago, then, we may mark the date when the engineering work had been completed and approved, financing was in place, and work had begun on the bridge that would serve until 1960. What viewers now may see in progress is Bridge Three. As cranes are seen and the first platform spans are placed it is realistic to look back and see how Bridge I began. That dream, that work, that investment together have surely made a huge difference.

John Appleyard is a Pensacola historian and writes a weekly historical column in the Pensacola News Journal. His 15-minute films about Pensacola are viewable, without-charge, Tuesday through Saturday, 10 a.m. to 4:30 p.m. in The Cottage, 213 E. Zaragoza St.