The team also set the triple steel beam sections (middle of photo below) near the navigational channel for the westbound bridge. Once beams (or girders) are set, crews will place the concrete decks, which will form the riding surface for the new bridge. New bridge decks are visible from Gulf Breeze westward toward the navigational channel.

Progress is also evident near the 17th Avenue interchange that opened to traffic last October. Work on the interchange that includes the roundabout and flyover, reconstruction of West Gregory Street, and the wayside park access road is 95% complete. Remaining improvements in this area include sidewalk and curb and gutter installation. 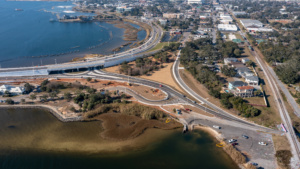 On the Pensacola approach to the new bridge, crews have placed structural asphalt. In addition, they are completing the concrete barrier wall, placing grass, seed and mulch near the approach and performing drainage improvements. 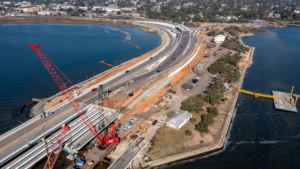 On the Gulf Breeze side of the bridge, the approach to the westbound bridge (Gulf Breeze to Pensacola) is mostly complete. Remaining work includes median and turn lane construction, final asphalt paving and striping, and curb and gutter work under the bridge for improvements to the wayside park.

Park improvements include additional parking space near U.S. 98 eastbound, and larger parking spaces capable of accommodating trucks with attached boat trailers. Near U.S. 98 westbound, there will be picnic and fishing areas. 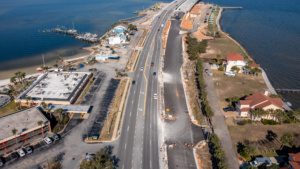 The schedule calls for placing traffic on the westbound bridge (Gulf Breeze to Pensacola) later this year.