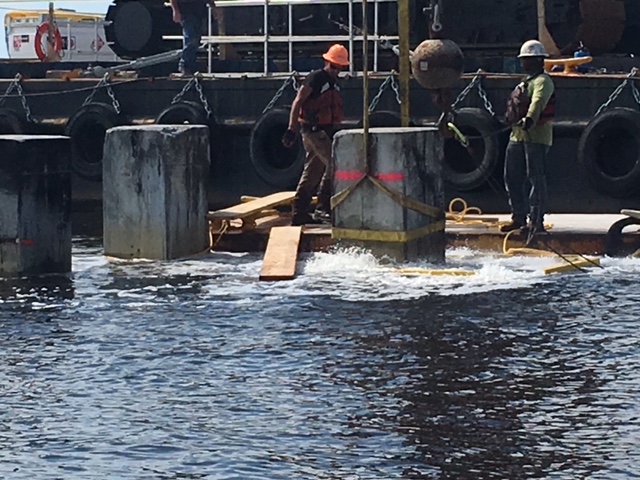 Work is underway to trim the concrete piles driven on the west side of the Pensacola Bay Bridge. The piles are being trimmed at, or near the water line in advance of topping them with massive concrete components informally known as a trophy pieces because their resemblance to a trophy or award.

Trophy pieces are single components consisting of a footer, a vertical column, and a cap. Typically, footers columns and caps are fabricated and installed separately, but for this project they are being cast as single units at the concrete casting yard on Bayou Chico. It is anticipated that setting them as single pieces, rather than three separate components, will save time and money.

Once the trophy pieces are in place they will be connected one-to-another using concrete beams. The bridge deck, or riding surface, will be constructed atop these beams.

For now, keep in mind that the trimmed piles may be difficult to see. During periods of high tide, the tops of these trimmed piles may be below the surface of the water. For this reason, boaters should use ONLY the main navigational channel when passing beneath the bridge. In addition, please give the construction barges and tug boats that are operating in the bay a wide berth.

< Back to Uncategorized
Top
Skip to toolbar